has been moved to new address 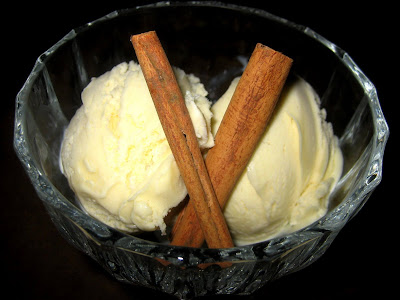 Exciting news, as most of you probably know, the United States of America has elected Barack Obama to be the next president!! We stayed up late last night watching the results. What an exciting election!! We are looking forward to having Obama as our leader.

Yesterday I shared my pumpkin cake recipe, if you aren't satisfied with having that for Thanksgiving dessert, give this one a try: apple crisp with cinnamon ice cream!

I love apple desserts and the topping on this crisp is most excellent. I used Granny Smith and Fuji apples because they are my favorite, but use whatever variety you like. I am sure Honeycrisp would be fabulous!! The topping has the perfect texture, nice and crispy, with loads of cinnamon, nutmeg, brown sugar, and of course the butter helps with the flavor too!

The crisp is great standing alone but why not give it a friend??? I made David Lebovitz's Cinnamon Ice Cream and it was the perfect companion for the apple crisp. The cinnamon flavor wasn't overpowering. It tasted phenomenal melting over the warm apple crisp! I recommend you making the ice cream to go with! 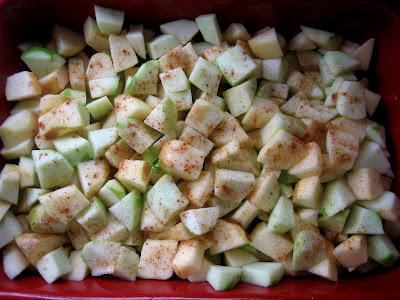 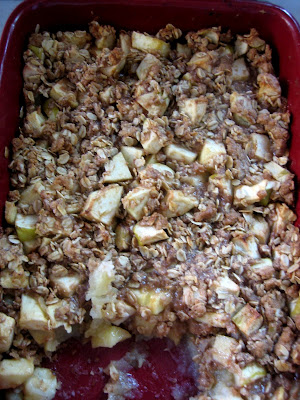 Place flour, sugars, spices, salt in a food processor and pulse to combine. Add the butter and pulse ten times, about four seconds for each pulse. The mixture will look like dry sand at first, then it will have large lumps of butter, then like course corn meal.

Remove from the food processor and pour into a bowl. Stir in the oats until well mixed. Refrigerate the topping for at least 15 minutes.

Preheat the oven to 375 degrees.

Peel, quarter, and cute the apples into one inch chunks. You should have about six cups.

Toss the apples with the lemon juice, sugar, and sprinkle them with extra cinnamon if you wish. Scrape the fruit mixture into a 9 by 13 baking dish.

Distribute the topping evenly over the apples. Bake for 45 minutes or until the fruit is bubbling and the topping turns deep golden brown. Make sure the apples are tender. Serve warm and with ice cream! 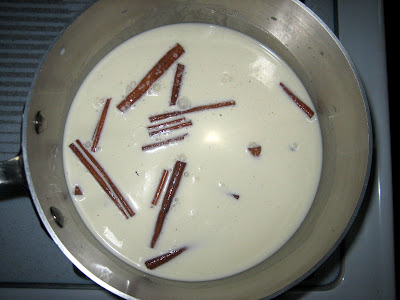 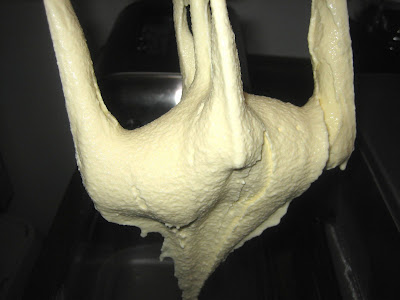 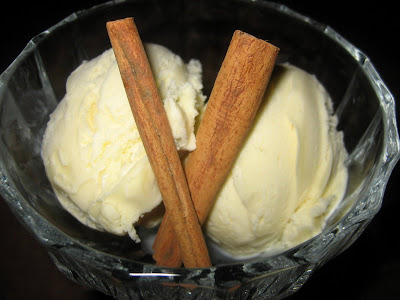 Adapted from The Perfect Scoop

Warm the milk, sugar, salt, cinnamon sticks and 1 cup of cream in a medium saucepan. Once warm, cover, remove from heat, and let steep at room temperature for one hour.

Rewarm the cinnamon milk mixture. Remove the sticks with a slotted spoon and discard them. Pour the remaining cup of cream into a large bowl and set a mesh strainer on top.

In a separate medium bowl, whisk together the egg yolks. Slowly pour the warm mixture into the egg yolks, whisking constantly, then put the egg yolk mixture back into the pan.

Stir the mixture constantly over medium heat with a heatproof spatula or wooden spoon. Scraping the bottom as you stir. Stir until the mixture is thick and coats the back of the spoon. About ten minutes. Pour the custard through the strainer and into the cream.

Chill mixture overnight and then freeze in an ice cream maker, using the manufacturer’s instructions.

Josh had a sampler of all of the desserts!!
He couldn't decide on just one! 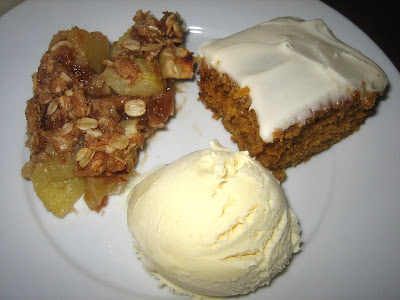 Mmmmm apple crisp. Mmmm cinnamon ice cream. I love fall. Thanks for putting this combo together.

All of these look so yummy! I have made Dorie's cinnamon ice cream and I wonder how this one would compare. I am excited about our president as well!

i would definetly take one of each as well! they all look like terrific desserts and they compliment each other nicely.

I will take one of those dessert sampler plates. Al the recipes sound and look fantastic!

Look at your with all of your fun desserts! I am coming over tonight ;) So yummy! I love all crisps!

This will be a great way to celebrate what was a happy election outcome in my house. (But I would think it would also be a great way to make yourself feel better if you weren't happy with the outcome?) Because we can all agree on cinnamon ice cream -- its the ultimate bipartisan dessert! I thought that both men carried themselves with class last night.

This is such a heartwarming dessert! I especially love the idea of warm crisp contrasting the cold cinnamon ice cream! It looks so good!

History has been made and I'm from the UK but am excited about Obama. He has a huge following all over the world!

Maria, you always make the most delicious treats. That Apple Crisps with Cinnamon Ice Cream is just heaven on a plate!

Hi Maria, i'm so happy for u that Barrack Obama has been elected to be the next president of USA.
ur desserts look so yummy esp the cinnamon ice cream.

I really want to make this. I love cinnamon ice cream and pairing it with an apple crisp is divine!

How I really wish I had a big plate full of everything right now!!

You're killin' me with all these fabulous desserts!!!!!!!

yum! this looks like a delicious combo! i love the cinnamon ice cream! yay obama :)

I love making ice cream! I will give this cinnamon one a try for sure!

You've outdone yourself. Wonderful combinations and your pictures are gorgeous.

What a perfect combination to pair the crisp with cinnamon ice cream!

wow .. what a delight to have those

I just love the ice cream. Don't get me wrong everything else is so good too, but cinnamon ice cream really steals my heart. Some of that ice cream with caramel sauce...ohhhh

Whoa, a fall dessert trilogy! I don't think I would have been able to decide either!

What a fantastic fall dessert. It looks so delicious.

Can I come over for dessert?! I love the fall theme.

Was going to try Dorie's version, but now I can't decide. I don't blame Josh; everything looks too good to have to choose one.

Ok, here's a sad story for you. I simultaneously discovered my love of cinnamon ice cream and a late onset of lactose intolerance, seemingly specific to rich ice cream. Argggghhh!

Dang it. Just picked up some lactose digestive aid (aka lactaid) and will be experimenting over the weekend. Wish me luck.

Impressive dessert, Maria! I'm not a big fan of pumpkin pie myself :)

mmm... looks delicious... congratulations to the americans for a job well done... i envy your country for having elected a new leader, hope next year, ours will be able to do just that... change... :)

Oh I looove apple crisp! I'll bet it's really tasty with cinnamon ice cream. I have an ice cream maker, but I've actually never made my own ice cream! I've got to try.

Thanks for dropping by my site! I hope you come back sometime :o)

Looks delicious! I see why he had a scoop of everything!

topping one of my favorite desserts with cinnamon ice cream is really unfair to my hips and thighs. there's absolutely no way i'd be able to resist many, many portions of this. :)

It’s been very exciting Maria watching on the BBC news here in the U.K. on the election. History has been made in America.

Yay for Obama! We're excited too. Your desserts are also exciting...I love apple crisp, it reminds me of my childhood.

i wouldn't be able to choose, either! those all look so delicious

I made this cinnamon ice cream from David's book a few weeks ago and man was is good!